SWEDEN APRIL TRIP 2019
Sat 20th April
Departed Svanesund at12noon and headed towards Jönköping…. beautiful weather and roads not busy. A couple of stops on the way for coffee, and a fruit snack…. we are both definately on a diet of NO BREAD, NO POTATOES, NO PASTA….. we shall see how long it lasts!! Hahahah. Stopped in Jönköping for a wander around…. nice place by the lake and pretty streets….. lots of students around as its a University town. Difficult to find a public loo but found it!!! …. the one and only! …. very nice pier with restaurants and quite exclusive. Decided to move on to Husqvarna for the night and found lovely lovely parking by the lake side. Dinner and wine La Strada….. still no bread, potatoes or pasta! …..but G not feeling too well….. oh dear. Hope he feels better tomorrow.
Free parking. Wonderful sunset.

Sun 21st April
Late start in morning due to G not feeling good in his tum…..I went for half hour walk along to guest marina … lovely sunny morning and nice area. Change of plan and not going up and round lake Vättern …..going to Oskarshamn for ferry to Gotland. Very nice drive across the country and with this weather, it just makes it so much more enjoyable! …. Not much to see in Oskarshamn where we get the ferry, but we parked up and had our meal. Big ferry boat, very full, but very comfortable, and a good crossing. Arrived in Visby just after 11pm and parked up outside the walled city. We had a nightcap and then to bed.

Mon 22nd April
UP very early to go and empty the pee pot!… 3 days (including Friday in Stenungsund) and it was full to the brim!!!! The morning was spent visiting the old town inside the medieval walls…… walking and walking, and a visit to the museum, plus up on the ramparts where possible. Nice old town, and probably very pretty in summer when lively and everything is open. Weather nice for being out. One part of the wall reminded me of Alcudia old town.

Later in the afternoon, we set off down the west coast stopping off first at Högklint cliff hanger view point, and walked a bit. Continued down to Sandhamn camping which was a lovely spot. Good camping site and perfect position right by the waterside. laborious cooking tonight to convert pork steaks into something edible! ….very messy but managed with minimal mess! And it turned out quite tasty with the veggies of spinach, carrots and sweet corn.

…… driving on south in and out of the coastal road, and rather pretty . Stopped at Hoburgen for lunch and a walk along the beach which is Stoney and also has quite unusual rock formations.

No luck in finding a good spot for the night until we reached Närshamn which is where we stayed….. its all very uninhabited everywhere, with lots of farms which is how life started here, and not much in the line of villages at all. Not much to do, but driving around is quite interesting with slightly changing landscapes, although its very like the other island Öland. I enjoy just looking!

Wed 24th April
Quite a change in the landscape today as we go north….. stopped off to see some STACKS or Raukar as they call them here….. very unusual rock formations.
We visited the lighthouse at Närshamn before we set off on the road…. wonderful wind blowing!!!

Rock formations at Ljugarn and then passed town called ALA ! …. how funny! Then on past the sheep farm that Stefan had years ago…. near Kräklingbo
… onwards to SLITE and a shop in the liquer shop for some wine. Amazing enormous Quarrie there. And on to Fårösund to take the ferry to the island. Wonderful wonderful night stop in the harbour called Lauters Fishing Harbour. Peaceful is not even close!!!

Thu 25th April
OMG still no movement from within….. will need to go to the chemist!! ….. cloudy day as we woke up and it continued that way. However, we had a lovely long walk along the coast to see the rock formations and then back to our parking where we had luxuriously long showers….. hair dressers at Salon la Strada! …. reading at the Library!! Hahahaha which was such a lovely little room! 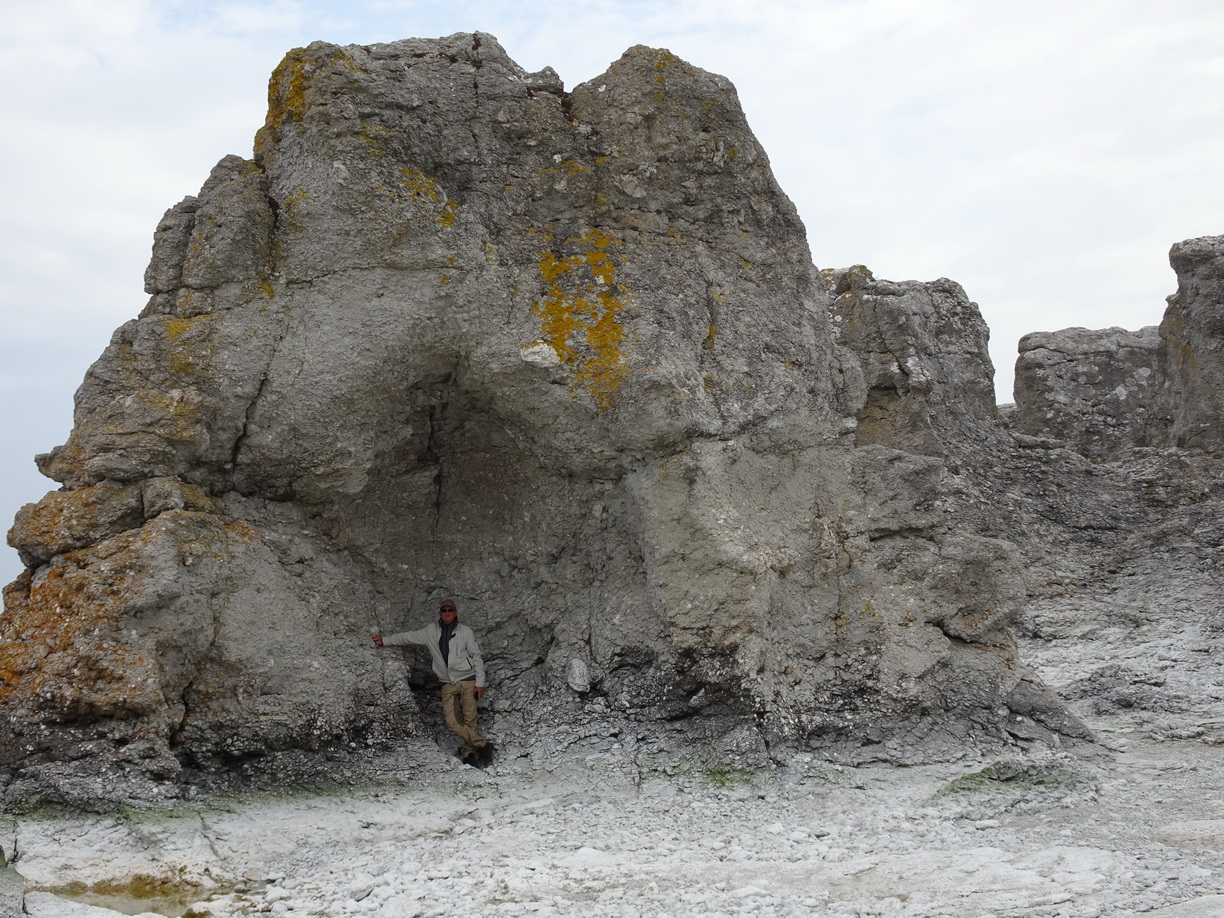 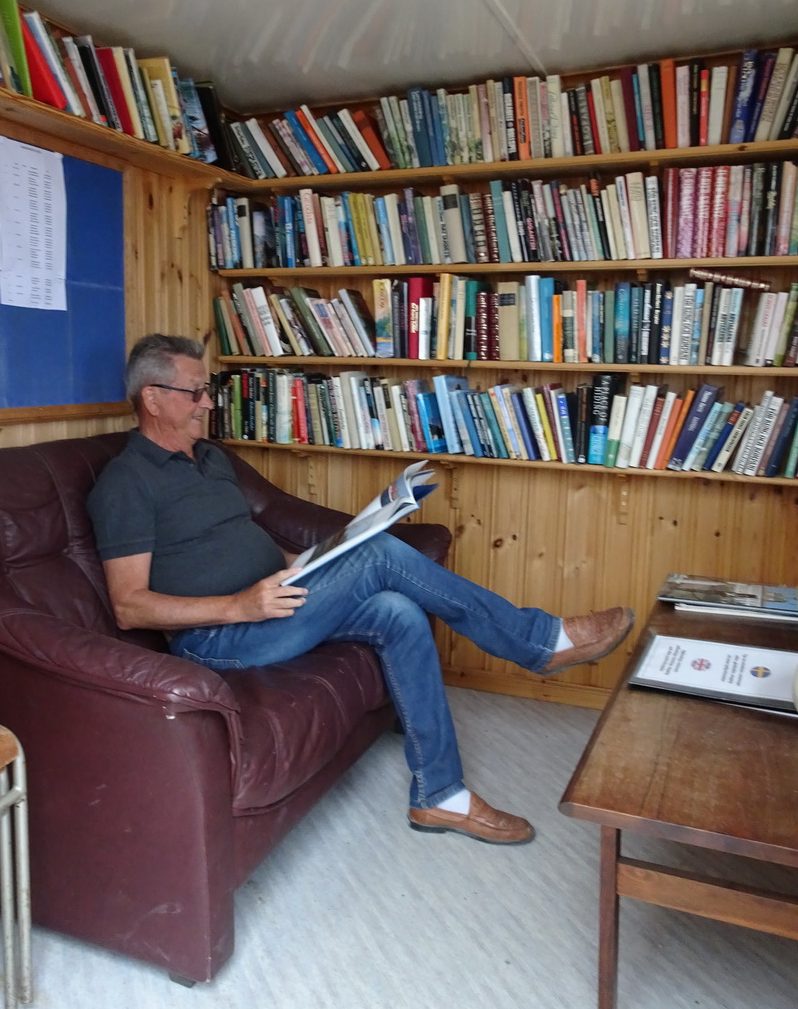 … then onwards, or should i said backwards as we headed back to the mainland Gotland. On the way we visited the lighthouse and had coffee at the one and only which also had the one and only gift shop where i bought a Ryanair bag hahahahaha and a pair of leather gloves, as did Goran…… ferry back over to Gotland mainland, and driving around till we stopped at Lickershamn for the night. I took a walk along the harbour jumping over rocks on the quayside and then back round the other side. Bad internet tonight. Managed to take a picture of a lovely church….. one of the 100 on this small island!!! …. I also have some of the ruins of the many Churches in Visby. They call this the island of 100 churches! Booked ferry to return tomorrow to Oskarshamn .`

Fri 26th April
NICE WALK in the morning along to Rauk name JUNGFRUN which had a romantic story attachéd to it! ….. BEAUTIFUL weather again today! ….. continued on the route back to Visby and stopped at Lummelunda to see the CAVES but not open till later on in the season….. however, a beautiful spot and would have been interesting.

Arrived in Visby before noon, so parked outside the walled city and had some lunch then a stroll around the town again, stopping for a coffee and a wine. Ferry departed on time and took just 3 hours to Oskarshamn. Good crossing. Drive to Kalmar and there just as it got dark at about 8.15pm. Parked up centrally.

Sat 27th April
Morning walk to visit Kalmar Castle….inside this time, as last time we visited it was closed!! …coffee in the castle proved to be verrrrry extensive but we sat in the baby Windows seats! .. later a walk in the old walled town and then on the road to Karlskrona where BoG were already parked up! …. after a bit to eat, BoG arrived back so we all sat out at our parking bench and table for wine and gin and tonics! 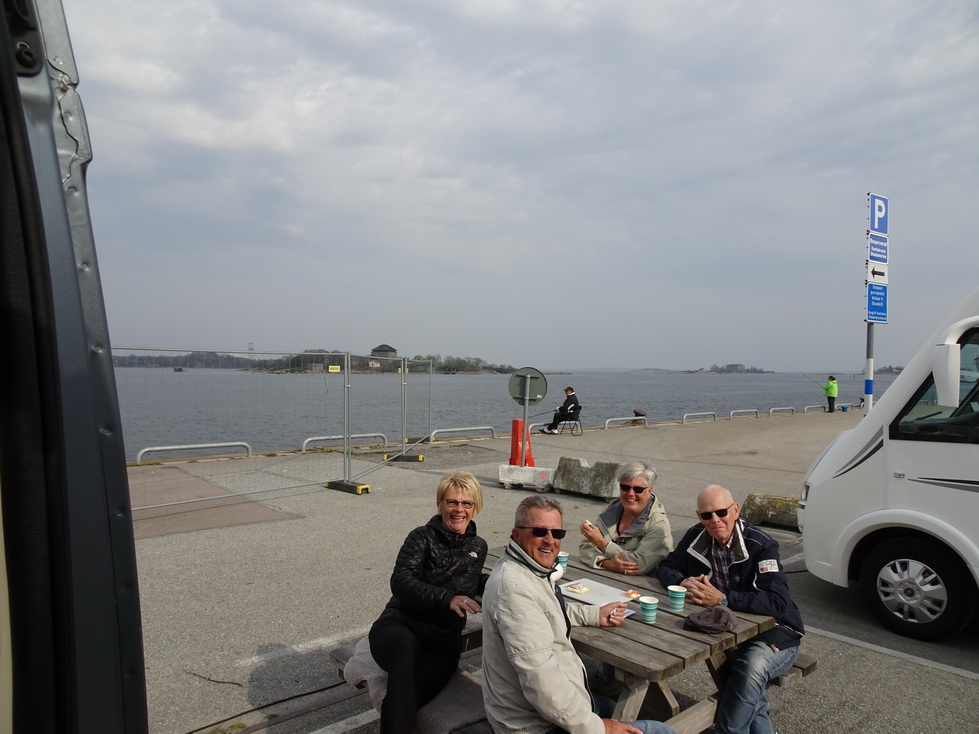 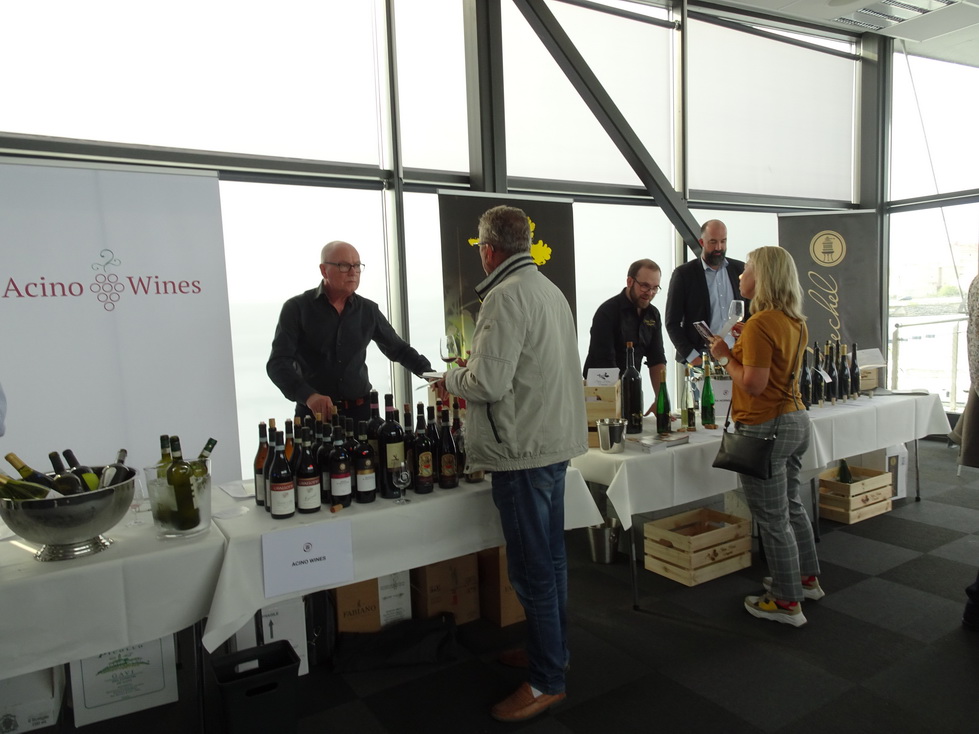 … G and I went along the marina where a wine tasting event was going on! ….. very interesting to find that in Sweden! …… and then a walk to the supermarket and then off out for dinner out! …. TORO was the name of the restaurant and it was very good. Nightcaps were taken in campervan Hamlet and no wine spilt this time!!! Hahahahah

un 28th April
Pouring rain in the night !!!Great facilitíes here in Karlskrona so a good shower before setting off….and a visit to the emptying station……. we drove out to a little island call Tjurkö for our fika….. shame it was not nice weather. Then the rain really came down during our drive to Nogersund farther south….. beautiful little harbour and a ferry over to Hanö which will be tomorrow.

Rain kept coming down so it was indoors for drinks with campers parked side by side, and then combined effort for dinner using the Hamlet camper as the dining room…… Later Birgita and I went for a good walk and then had our last evening chat in La Strada before retiring for the night.
Mon 29th April
What a wonderful day we had today….. starting with a long walk along the coastline on rocky and Stoney ground….then back to the camper to do the emptying etc before taking the ferry boat across to the island of Hanö. We had a couple of hours there just wandering around the nature through the woodland along the coast and up to the inner island lighthouse. Quite quite lovely!

Back to the mainland and on our way down in Skåne trying to find a place to park side by side. Not easy, but in the end we found a great place just beside the beach which had fantastic sand dunes and white fine sand just like at home! …. Dinner had to be indoors at the Hamlet camper as it was a wee bit nippy outdoors….. we did the fish on Hamlet’s bbq which was just perfect! ….. after dinner Birgitta and I had a stroll down to the beach and the boys had their afterdinner drinks at La Strada. We are near Borrby which is where G and I had a few days years ago in the Knaus.

Tue 30th April
Drive along the Skåne coast, which is even more beautiful than I remember! …absolutely lovely. A stop in YSTAD for coffee and a stroll around the pebbled streets and then on to Skanör where we found a great marina to nightstop with good facilities and after a walk down to the beach we set up the BBQ camp and got cooking!! … later we went to see the Walpurgis bonfire….. nice to see the villagers marching down with their torches to light the fire. Choir singers on the platform!… a huge turn out of people.

Wed May 01st
WE Say goodbye to GoB and they go off to Malmö and we head north on the coast stopping off at Falkenberg…. a lovely, lovely little marina with facilities. Dinner in La Strada and a quick walk around for me…… heading home tomorrow.

Thu May 02nd
ULLARED to the optician shop for my 2pairs of glasses! ….very impressed with the size of the place and the machinery there to make them! …. full revision done and chose JOHN LENNON and ESPRIT. 3 hours to shop and then collection. Unfortunately the JL pair were not right so they said they would do them again ready for collection tomorrow…. not quite what we planned, but one day more, one day less…. no worries. Headed in to ICA to shop for dinner and to find the Systembolaget was one of the “order” shops! …. so no wine tonight!….. Gin and grap tonic instead ad half a beer! …. stayed at camper parking for 100 sek with full facilities.

Fri May 03rd
Woke very very early with no gas heating….. then Woke really early again so breakfast was also really early and then to Ullared to pass away the time till 12noon . Coffee and a long walk around the big shop again and managed to buy something! ….. glasses still not right so just got a refund on JL…. shame really as I quite fancied having a change….. no worries the other ones are fine and only cost about 400 euros and good quality. Really heading home now! With a stop at Bauhaus for gas and then the camper shop! A good trip and 2 weeks was fine!